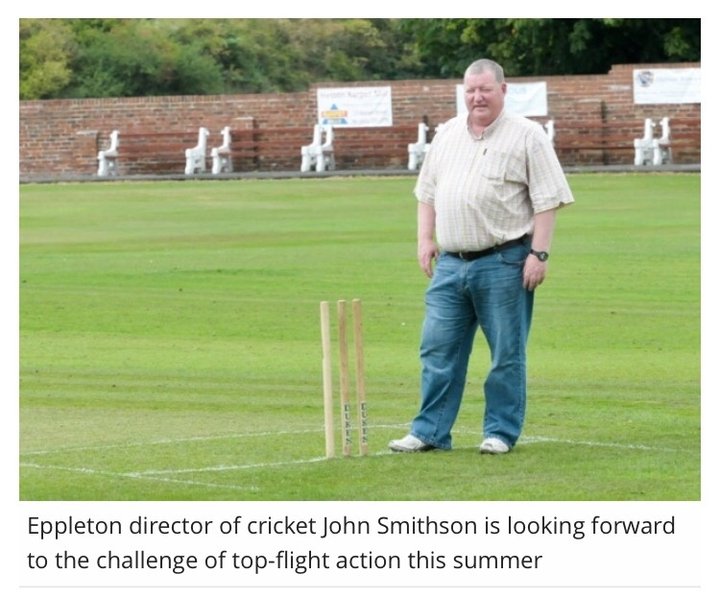 The new season is due to start on Saturday, weather permitting, with Eppleton raring to go.

The Church Road outfit reached the pinnacle of club cricket in the region when they won promotion on a rain-hit final day of the 2015 season, the title success completing a remarkable league and cup double.

Sustained success against top-flight opposition in cup ties last summer should stand them in good stead as they embark upon the new adventure of Premier Division cricket, and if they were looking for any additional motivation for the big day their opening fixture could not be more intoxicating to the senses as it sees them step out at the Emirates Riverside to take on Durham Academy.

Director of Cricket John Smithson is clearly excited, but nonetheless realistic about his club’s ambitions.

He said: “Our aim is to be competitive in our first season at this level, and ensure we remain in the division.”

Almost inevitably there have been a few changes of personnel. Gone are Joe Dodd, because of work commitments that make the all-day format of cricket impossible for him, Zaheer Shahbaz and Kamran Shah, who have joined Sunderland, and Liam Mallaburn, who is taking a year out due to family commitments.

But Smithson is pleased with the new arrivals.

He said: “Paul Coughlin is returning to his home club as our Durham player. We are expecting to see a lot of Paul as he is returning from a serious stress fracture of the back, although we don’t know how much bowling he will be allowed to do.

“Adhijai Mansingh is a 19-year-old from Jamaica who has represented them at Under 19 level. He is an opening bat who bowls leg spin – although I can’t see him bowling much leg spin in Hetton during April.

“He comes recommended to us by our former ‘pro’ Jimmy Adams.”

The other newcomers are Liam Dixon, a bowling all-rounder who took 40 league wickets for South Shields last summer, and James Davidson, who has joined his brother Paul after leaving South Hetton. Gary Burlinson will lead the team.

South North, champions 10 times in 13 years, romped through an undefeated campaign in 2015 to retain their title, making it just one league defeat in two seasons.

Only Chester-le-Street have come close to challenging this domination on a sustained basis, their titles in 2009 and 2010 being followed by two second places and two thirds in the following five years, and they will no doubt be amongst the Bulls’ main challengers again.

But the Cestrians have lost one of their leading players, Simon Birtwisle, to their main rivals. He scored more than 800 league runs and took 28 wickets in 2015, a performance which won him the joint League player of the year award, and he will undoubtedly prove a major acquisition for the champions, who will also have former Aussie Test star Marcus North at their disposal again.

To compensate, Chester have Richard Waite back in their ranks following his move from Stockton. Waite, who has won the player of the year accolade five occasions, previously spent three seasons at Ropery Lane, helping them win two titles, and with Liam Simpson back after a year at Felling, and the club also likely to see plenty of Durham player Gurman Randhawa, the Cestrians will be ultra-competitive.

Whitburn, a comfortable eighth last time out, face a tough opening assignment at South North. They look to have recruited well, with skipper Ross Carty in buoyant mood.

He said: “I am absolutely delighted with the signings we’ve made and firmly believe this is the best squad of players we’ve had at the club in several years.

“We have a perfect balance of home-grown players, seasoned campaigners and talented youngsters which should stand us in good stead for the season. Our overall aim is to break into the top half and win a regional cup competition.”

The new faces at the Village Ground are New Zealander Jeremy Benton, a 20-year-old left-arm spinner who played in the U19 World Cup two years ago, England U19 international Jack Burnham, who was leading run scorer in the recent U19 World Cup, former Durham Academy all-rounder Joe Coyne, who has moved up the road from Boldon, and Peter Finch, a bowling all-rounder from Ashington. The two main departures are Aussie Scott Condy and Michael Turns.

There have been a few key departures at Hetton Lyons.

With Lal Kumar stepping down as overseas pro, Hetton have secured the services of Faiz Fazal. Fazal, a left-hand opening bat who bowls right arm seam, has represented the Rajasthan Royals in the IPL, and has more than 5,000 first-class runs to his name.

Lyons also expect to see quite a bit of their Durham player, with Brydon Carse likely to feature regularly.The 20-year-old South Africna-born quickie was formerly with Burnmoor.

Durham Academy will have a particularly young side in the field, with academy manager John Windows set to turn out and captain the team in most of their matches.

Elsewhere, South Shields have free-scoring Aussie Tim David back for a third consecutiveseason, while Matty Muchall returns after a two-year spell at Benwell Hill, Tahir Khan resumes at Tynemouth, where he is joined by Stu Poynter and Pollard, and Newcastle’s overseas man is Aussie Nick Hobson, with Chris Youlden (Sunderland) and Sean Tindale (Burnmoor) the other new faces.

Gateshead Fell welcome back Adam Whatley after a season playing for York, Benwell Hill will be led by Kyle Coetzer with Dutch World T20 Cup star Paul van Meereken likely to be a surprise package, and Stockton will have Ryan Buckley and Kiwi Mitch Gardner playing alongside Allan Worthy.

Weather Update for Saturday and Sunday's League Matches  Please could all see the latest update regarding the weather arrangements for this weekend's league matches.