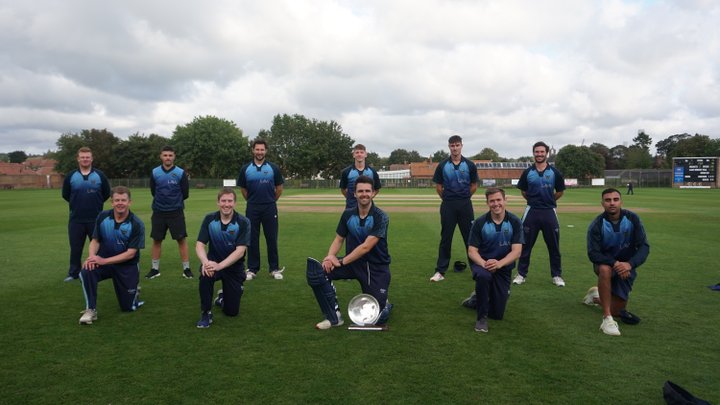 Chester-le-Street beat Burnmoor by 7 wickets to become the winners of this year's Banks Salver competition.

It was Chester-le-Street against Burnmoor in the final of this year’s Banks Salver competition. Burnmoor, who won the NEPL Premier Division in 2019, chose to bat first on a warm September day at Ropery Lane. Openers Allan Worthy and Ross Greenwell got off to a slow start, thanks to some economical bowling from club stalwart Quentin Hughes (0/27) and left-arm seamer Jack Campbell (1/39), who was rewarded for his good season with selection in the Durham squad for their Vitality Blast group games this week. Campbell broke the opening stand in his fourth over, dismissing Greenwell for 16 from 30 balls. Ryan Pringle upped the run rate when he came to the middle, but his stay was a short one as he was caught by Campbell off the bowling of Amaan UlHaq (1/19) for 17 from 20 balls. Worthy and Craig, who put on 43 together, looked comfortable in the middle before left-arm spinner Liam Burgess (2/26) made the breakthrough, dismissing the captain for 27 from 59 balls. Craig went on to make an unbeaten 58 from 97 balls, including 5 fours, but Burnmoor continued to lose wickets at regular intervals throughout their innings, ending on 149/8 from their 40 overs to give Chester-le-Street the upper hand at the halfway point.

They pushed this advantage home with a 90-run partnership between openers Jacob McCann and George Harrison. Ryan Pringle (1/22) eventually made the breakthrough in his second over, the twenty-fourth of the innings, trapping Harrison lbw for 22 from 60 balls, but with only 60 runs needed for victory, Chester-le-Street were already well on their way. They lost McCann for 43 from 91 balls two overs later, and Graeme Bridge (1/22) dismissed Andrew Smith for a quickfire 18 from 19 balls to leave the home side 112/3 after 30 overs, but the openers had set a good platform. Captain John Coxon (21* from 34 balls) and Quentin Hughes (16* from 12 balls) saw Chester-le-Street over the line with 7 wickets and 4.2 overs to spare.

 Keith Robson It is with great sadness that I must tell you that Keith Robson passed away suddenly and peacefully yesterday.

NEPL Statement: Banks Finals (19/09/2020)  The following Finals due to be played this weekend have been postponed till pre-season 2021 because of Covid-19 related issues.